CSS stands for Cascading style sheet, which is used with HTML to give design to websites. Using CSS we can control several HTML pages layout.

Name all the versions of CSS

What are the main differences between CSS3 and CSS2?

Here are the list of difference between CSS3 and CSS2:

How can we include CSS in HTML?

We can include CSS in HTML by 3 ways:

Why is External CSS useful?

If we do change in one CSS file, it will reflect in all HTML pages of the web-application or website.

What are the limitations of CSS?

Name the type of CSS3 positions and explain them

What is CSS framework? Name them

A CSS framework is a library allowing for easier, more standards-compliant web design using the Cascading Style Sheets language. Most of these frameworks contain at least a grid. More functional frameworks also come with more features and additional JavaScript based functions, but are mostly design oriented and focused around interactive UI patterns. Here are the top CSS frameworks used by developers:

What is CSS Selector?

A CSS selector is an element pattern that tells the browser which HTML elements it should select for the application of CSS property values.

There are many types of CSS selectors, such as CSS Class Selector, CSS Universal Selector, CSS ID Selector and CSS Group Selector.

All html elements are considered as box. 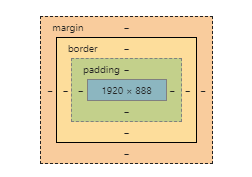 What is the difference between padding and margin?

Margin: In CSS, the margin is the property by which we can create space around elements. We can even create space to the exterior defined borders.

Padding: In CSS, padding is the property by which we can generate space around an element’s content as well as inside any known border.

What do you mean by short-hand notation in CSS3?

Shorthand notations are also called as shorthand properties in CSS. That lets you set multiple values of CSS properties simultaneously.

It’s often good to use shorthand notations because it reduces the file size and even improves the performance.

can be converted into 1 line using shorthand property

What do you mean by graceful degradation?

Graceful degradation is about creating a website design that will be compatible with the latest browsers and, at the same time, will remain functional to an extent on smaller screens and older browsers.

Polyfills can be used to build in missing features with JavaScript, but acceptable alternatives to features like styling and layout should be provided where possible, for example by using the CSS cascade, or HTML fallback behaviour.

Pseudo-elements are used to style a specific part of an element. They start with a double colon ::.

::before and ::after are the most used pseudo-elements. They are used to add content before or after an element, like icons for example.

What is CSS preprocessor? What are the benefits of using it?

A CSS preprocessor is a program that lets you generate CSS from the preprocessor's own unique syntax.

CSS preprocessors are scripting languages that extend the default capabilities of CSS. They enable us to use logic in our CSS code, such as variables, nesting, inheritance, mixins, functions, and mathematical operations.

What is CSS opacity?

What is z-index in CSS?

The z-index property in CSS controls the vertical stacking order of elements that overlap. As in, which one appears as if it is physically closer to you. z-index only affects elements that have a position value other than static (the default).

An element with a higher z-index is always stacked above than a lower index.

What are CSS Sprites?

CSS sprite basically combines multiple small images and creates a big one image. The use of image sprites is done for two main reasons:

What is Pseudo-class in CSS?

A CSS pseudo-class is a keyword added to a selector that specifies a special state of the selected element.

For example, :hover can be used to change a button's color when the user's pointer hovers over it.

What is the difference between visibility:hidden and display:none?

display:none -> It will not show the html element in the page, also it will not consume space of the HTML element.