C# is one of the widely popular programming languages and as few years Microsoft released .NET Core and made .NET cross platform, C# demand is increased more and more, so does C# jobs. So, in this article, I have provided commonly and widely asked C# interview questions, which should be read by every professional C# developer  or beginner developer to increase there C# knowledge. Let's get started, we will start from basic and move on to advanced question/answers. 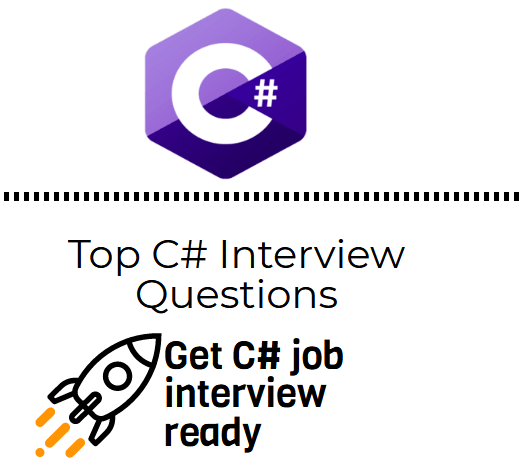 C# is a general-purpose, modern, object-oriented based programming language developed by Microsoft in 2000. C# is primary language to create software or web-application using .NET framework.

C# is designed for Common Language Infrastructure (CLI), which consists of the executable code and runtime environment that allows use of various high-level languages on different computer platforms and architectures.

Some features of C#:

What are Jagged Arrays in C#?

A jagges array is an array of arrays in C#. Here is an example of Jagged array in C#

In the above example, we defined a Jagged array with name "jaggedArray" with size 2 and then inside the curly bracket we defined and declared its constituent arrays.

Explain about Class and Objects in C#?

C# is object-oriented programming language, that is, it si dependent on class and objects.

Class: We can consider class as a template, declaration or blueprint that is used for classifying the object. It contains variable members, functions, structure, properties and many more components. It is the basic building block of object-oriented programming. In order to create a class, the class keyword is used.

Objects: Object is an instance of a class, we create object to access methods, variable etc of class.

When calling a function, are parameters passed by value or by reference?

In C#, arguments can be passed to parameters either by value or by reference. Passing by reference enables function members, methods, properties, indexers, operators, and constructors to change the value of the parameters and have that change persist in the calling environment.

To pass a parameter by reference with the intent of changing the value, use the ref, or out keyword.

What is the difference between ref and out parameters?

Output parameters are similar to reference parameters, except that they transfer data out of the method rather than into it.

Reference parameter copies the reference to the memory location of an argument into the formal parameter. This means that changes made to the parameter affect the argument.

Can you return multiple values from a function in C#?

Yes, using output parameters we can return multiple values from function in C#.

A Tuple can also be used to return multiple values from a method in C# 7 or above. Example

Explain all types of Classes in C#

There can be 4 types of classes in C#:

What is the difference between a class and a struct?

Here is the difference between both:

What are the different types of collections in .Net?

What is boxing and unboxing in C#?

When a value type is converted to object type, it is called boxing.

When an object type is converted to a value type, it is called unboxing.