Objects are instances of Class, created using the keyword "new". You can create as many instances of a class as you would like.

When a new Object is created, a memory will be allocated for the class in heap memory area, they can be stored in either a named variable or in an array or collection, which is called as an instance and its starting address will be stored in the object in stack memory area.

Using the object of an class we call methods/properties of class to execute the program.

2. What is Object Oriented Programming in C#?

Object oriented programming means where Code is executed with the help of Objects and Classes.

C# uses concepts of Classes and object, where we create class for particular task for example "Student.cs" class is created where properties of students are declared "FirstName", "LastName" etc which is then accessed by creating class objects.

3. What is the difference between procedural and object-oriented programming?

Procedural Programming, which at times has been referred to as inline programming, takes a more top-down approach to programming. Procedural Programming takes on applications by solving problems from the top of the code down to the bottom. This happens when a program starts with a problem and then breaks that problem down into smaller sub-problems or sub-procedures. These sub-procedures are continually broken down in the process called functional decomposition until the sub-procedure is simple enough to be solved.

Encapsulation means hiding complexities of program which is done in C# using Classes and Objects.

For example, we can hide a method from accessing it outside of class by using "private" keyword, before defining method.

We can achieve Polymorphism in C# by defining same method name, but with different argument types.

For example, when a user visits your website, you just show them buttons to navigate but not the functionality used when Button is clicked.

Inheritance is a feature of object-oriented programming languages that allows you to define a base class that provides specific functionality (data and behavior) and to define derived classes that either inherit or override that functionality.

8. What is difference between Abstract Class and Interface in C#?

An Abstract class is a class whose objects can’t be created. It is a kind of guideline or a template for other classes. An abstract class can be considered as an incomplete class that does not represent complete behavior.

When Abstract class is derived by a class, we can define or not define methods of abstract class.

An Interface is another building block of C# which is a blueprint or template of a class.

When Interface is used by Derived class, it needs to define all methods, provided in Interface.

9. Can you declare an overridden method to be static if the original method is not static?

No, you cannot, because either both methods are static, or neither one and it is not valid for two methods with the same signature (name and parameter types) to have different modifiers such as static.

Here is the Diamond problem.

Basically, if you have class A and B, both contains a method draw, and you inherited it in class C, which inherits draw method, now compiler doesn't know which draw method to execute, whether it should be executed from Class A or B.

Generally, Cohesion means completeness with itself.

In C#, Cohesion is a measure of how closely related the members (classes, methods, functionality within a method) of a module are to the other members of the same module. It is desirable to increase cohesion as that indicates that a module has a very specific task and does only that task.

In General, Coupling means dependency on others.

So in C#, Coupling is a measure of how much a module (package, class, method) relies on other modules. It is desirable to reduce coupling, or reduce the amount that a given module relies on the other modules of a system. 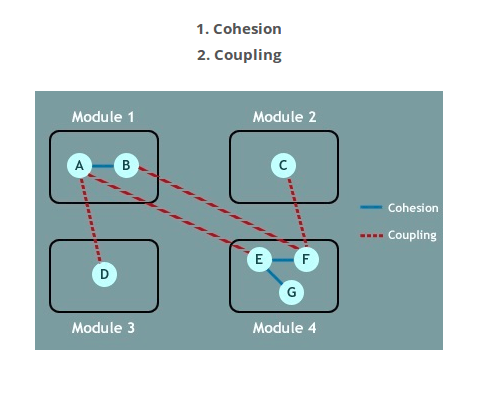 13. What is Operator Overloading in C#?

For example, a + operator, when used with string type values, it will join string while if we will use + with int type operands, it will sum the values and give the result.

14. List the differences between method overriding and method overloading?

15. How can you prevent a class from overriding in C#?

By using the sealed keyword, when creating class.

No, you can't since Enum are "sealed" by default.

Nested class is nothing but defining a class within another class.

The this keyword refers to the current instance of the class and is also used as a modifier of the first parameter of an extension method.

Static member functions, because they exist at the class level and not as part of an object, do not have a this pointer. It is an error to refer to this in a static method.

19. Can you declare a private class in a namespace?

No, this is not possible, because making namespace private doesn't give meaning full purpose.

You can make the classes internal but this only prevents anyone outside of the assembly from using the class. But you still have to make a separate assembly for each namespace that you want to do this with and that is why we shouldn't do it.

20. What is difference between method and function in OOP Concept?

A method is on an object or is static in class while A function is independent of any object (and outside of any class).